In the early Eighties, two Surrey owners of injected Aston Martin V8s met through the local AMOC (Aston Martin Owners Club), no ‘interweb’ and in those days phones always had a cable attached. Their joint interest was largely keeping their cars on the road without paying a third party large amounts, that neither could afford or justify as working people!

David Such was the one that went off into racing his V8, while I was happy just to able to keep mine on the road while having a family, without having to sell one of them to keep the car in one piece.

I had mine for 29 years, David slightly less, but his had a far more chequered and famous career!

You get older, things change, David went off into Vanquish and I into DB7, neither of us in the motor trade in any way. I saw a niche market in specialising in DB7s and started working on other people’s Astons as a part time work/interest. This eventually developed into AstonDB7.com.  Still in touch with David Such, I kept on at him to make better use of all the old Aston experience going back nearly 40 years, and more importantly what he was learning from his close involvement in the running of his Vanquish.

DB7 and Vanquish are about specialising and there is quite a market, maybe not big enough for the big businesses, but if you ask him, I think he would say that I have pushed him into his Vanquish specialist company v12Vanquish.com. 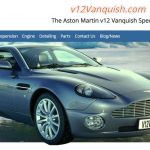